Cunnington Farms borders on a busy road that cuts through the red-rock-sided valley south of Moab, Utah and continues up into the La Sal Mountains.  Lots of folks drive by our farm, escaping the heat of the desert in the spring and summer, and going to snowshoe and ski in the winter.  At least a fourth of them stop and stare at the “red sheep” in my pasture.

Tunis are distinctive looking, with their truly red-gold faces and legs, and cream colored fleece.  The lambs are a deeper color, and often I have a line of cars stopped across the road, watching the charming red lambs chasing one another across the pasture and leaping up on any high spot to play king-of-the-mountain.

Tunis are “easy keepers”, and do well on grass and hay alone, as a principle diet.  They are great mothers.  Their fleece is useful for many fiber projects, and their meat has been testing and judged the most flavorful and best tasting by the American Livestock Breeds Conservancy.  They have mild natures, even the rams, and can easily become pets if that is what you wish. 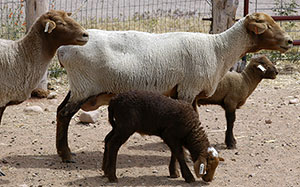 Tunis are much in demand at this time.  And with all their advantages, that is certainly understandable.  I like their friendly nature, and not having to do much to help the moms deliver twins and often triplets.  I sell about equal numbers of Tunis for meat production as I do for wool production, as I concentrate on the quality of my Tunis wool in all my breeding animals.  As with many of the dual purpose, and even meat sheep breeds, the wool quality has been largely overlooked.  And while the wool processed by itself does not have quite as many applications, if you blend Tunis (or Cheviot or even Suffolk) with other wool, you get a great loftiness and bounce that can be very desirable.  I will always have the “red-heads” on my farm.

Tunis are born either a tan or red color. As they mature they gradually turn a creamy white with light tan or reddish faces and legs, sometimes with a white spot on the forehead and tip of the tail. Tunis have expressive eyes, long pendulous ears and a slender head, they are known to be a calm, docile breed.

Evolving from a number of fat-tailed breeds imported in the late 18th century from the Middle East and Africa, then cross-bred with several established European breeds, the Tunis is one of the oldest breeds in the United States. The first documented evidence of their arrival in America was in 1799 when Judge Richard Peters of Pennsylvania received Tunis sheep from the ruler of Tunisia as a gift. These sheep and other imports became established in Pennsylvania, Virginia, Maryland, North and South Carolina, and Georgia. The Civil War almost exterminated the breed, but one flock survived in South Carolina, descendents of this flock were taken to Indiana in 1894 where they have thrived to this day.

Although Tunis sheep are listed on The Livestock Conservancy Priority List, it is now listed as a breed to “Watch” i.e. “Fewer than 2,500 annual registrations in the United States and estimated global population less than 10,000”, there has been a steady increase in registrations for the past 10 years showing the breed’s recovery and growing popularity.